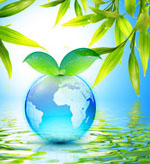 At the time of Earth’s conception, the blueprint planned for and had incorporated into it a system of waste disposal, that would not only fulfill that purpose, but would also fulfill the energy exchange of the Cosmic Law of Give & Take: What you give, you will get back, what you take, you will have to give back.

It had been foreseen that humans—at certain times in this school of evolution on Earth—would not be able to deal with all the stresses that certain physical, mental, emotional and spiritual energies would cause them.

The Recycling Grid connects all who live on Earth with the Earth herself in a circuitous fashion.  She provides us with the means to live and prosper:  Water, soil to grow crops, air / oxygen to breath in exchange with her plants, etc…  The Recycling Grid system then takes all the excess of human pain—physical, mental, emotional and spiritual distress beyond what each individual being can handle—and recycles it in a process that transmutes these pain energies into Divine Unconditional Love, transferred back to Earth to replenish her.

During the time of the Fall, the Recycling Grid system was damaged.  But as the population was low, this did not immediately cause undue problems. Then, in the last hundreds of years, the population grew so large, so rapidly, the results from the damage to the grid system began to show-up.  The Recycling Grid system began to back-up through human connections to the grid, and back into human bodies.  (Imagine a stopped-up toilet at the point of overflowing…)

All the excess stuff became too much to handle.  This is when large groups of beings volunteered to take on stuff for other people and hold it for them, until they were able to handle it themselves.  Many Lightworkers (both long-time and newly called) have had past-lives taking on and holding pain for others.

And this fix worked well, well up until the last fifty+ years.  That is when populations reached all-time highs and the Fear Matrix reached an unprecedented mass.  The back-up damage to humans was so extensive that even those who specialized in holding pain could no longer cope.

You may have damage to your Recycling Grid connections when:

Li Lan has been treating these conditions in her clients as they have shown up over the past years, and has now been guided to share this healing information with a wider public.

In the past she had offered healings for these damaged connections with the Recycling Grid through a lengthy session for ‘Connection to the Earth Grids Healing’:  Now she is able to offer the same (if not better) results in the form of the Earth Grid Recycling Module at an affordable price.

$ 40.–
Price includes download, installation and activation of this module.
All Earth Grid modules include from between 38 & up to 56 tasks.
Appointments available by telephone / skype™

Radio Interview: Inspiration on the Radio